Twitch had already broken viewership records in the first quarter of 2020 amid coronavirus lockdowns, surpassing 3 billion total hours watched in a single quarter for the first time. In the second quarter, it appears that Twitch has broken that record and several others once again.

According to a new report from Streamlabs and Stream Hatchet, Twitch saw a massive 62.7% increase in hours watched from Q1 2020 reach 5 billion hours watched in the second quarter.

This figure was also up by 83.1% year-over-year and helps to cement Twitch’s place as the leader among game-streaming services, with a 67.6% market share.

In terms of streaming, Twitch jumped 58.7% from 121.4 million hours in Q1 to 192.7 million in Q2. Unique channels increased from 63.9% quarter-over-quarter from 6.1 million in Q1 to nearly 10 million in Q2. And average concurrent viewership, meaning the number of viewers watching Twitch at the same time, grew 63.4% over last quarter to reach 2.4 million in Q2. 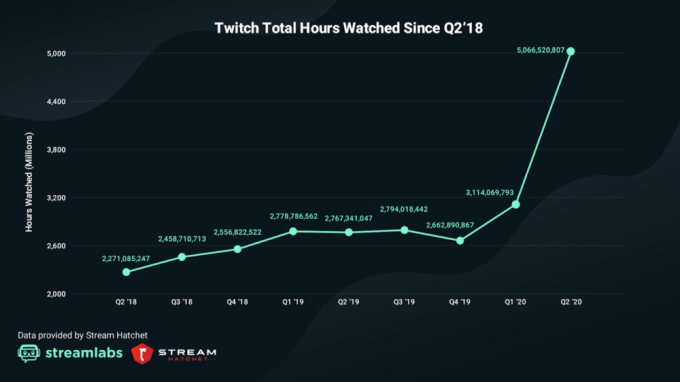 Of course, the headline news this quarter was Microsoft’s announcement about its plans to shut down its game-streaming service Mixer.

The service will wind down on July 22, and Microsoft has teamed up with Facebook to give users a new home. But that doesn’t guarantee Mixer users will make the switch — and Mixer’s exit may instead help propel Twitch to acquire even more market share than it does today. 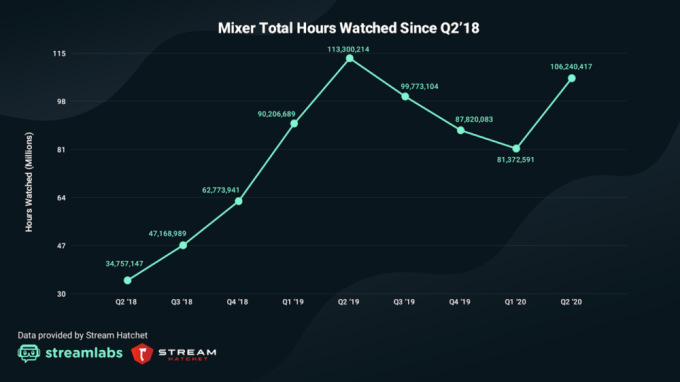 Though Mixer is soon exiting, it had one of its best quarters to date in Q2, reaching 106 million hours watched, up 30.6% from Q1. It also grew its lineup to over 5 million channels. But in context of the broader market, Mixer wasn’t making a dent — it only managed to secure 1.4% market share by Q2, a figure that had actually fallen by over half a percentage point from the prior quarter.

Meanwhile, YouTube Gaming Live increased its hours watched 39.6% from Q1 to Q2 to reach 1.5 billion. To some extent, the growth stems from recent acquisitions of top talent, including Jack “CouRage” Dunlop and Rachell “Valkyrae” Hofstetter, as well as the continued success of CouRage, noted the report. 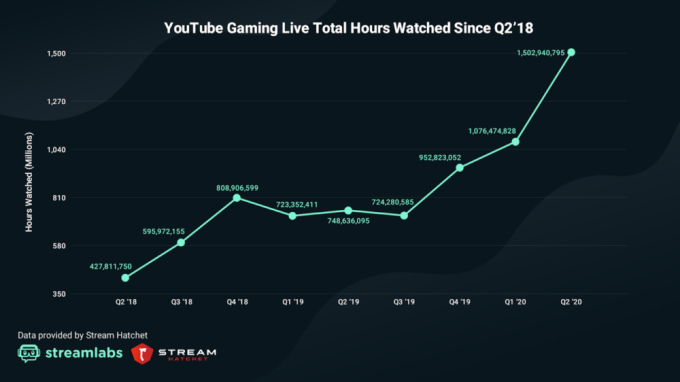 It’s still too early to know if Facebook Gaming will end up benefiting from Mixer’s exit, as planned. But hours watched on the service grew 48.5% quarter-over-quarter to reach 822 million; hours streamed hit 6.1 million; and unique channels reached 203,554. However, Facebook still only has an 11% share of the market and that hasn’t changed since Q1, the report found. 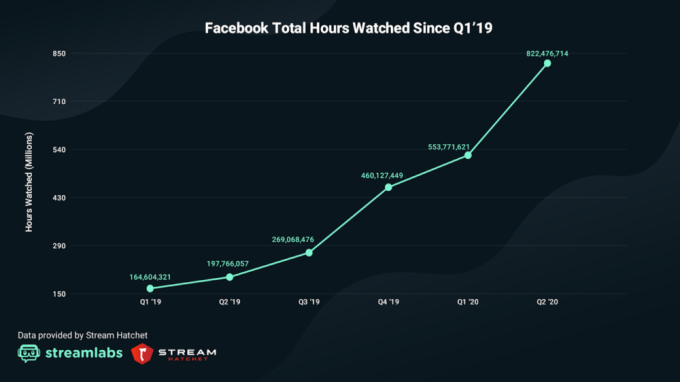 Though Twitch — and to a lesser extent, other game-streaming services — have clearly gained in usage as more consumers look for ways to be entertained at home amid the coronavirus pandemic, it hasn’t been all smooth sailing for the Amazon-owned game-streaming site this year.

In recent days, Twitch streamers were hit with a deluge of new RIAA takedown notices that required creators to painstakingly dig through hundreds of hours of past footage to find the infringing content, as Twitch didn’t offer robust search tools or bulk deletion capabilities.

But more concerning is that Twitch has come under fire for its failures to properly protect its community members from abuse and harassment, predatory behavior from adult streamers toward children, and other issues. In June, over 70 people in the gaming industry came forward with allegations of gender-based discrimination, harassment and sexual assault. Twitch vowed to do better, but its failure to set the proper tone for its community in the early days may work against it.

To date, these problems haven’t dampened Twitch’s growth from a viewership or market share perspective, but they could handicap its potential as a revenue-generating business. Already, Twitch has been struggling to generate ad revenue, and its failures to detoxify its community could only make things worse.

Marketers today are growing increasingly concerned about having their messages positioned next to hate speech and other divisive and toxic content. Currently, an ongoing Facebook ad boycott has grown to now officially include over 400 advertisers and has pushed giants like Unilever, Coca-Cola and Pfizer to pause their ad spend on Facebook’s social network. These same advertisers won’t likely jump at the chance to market their products and services on a game-streaming site that can’t control sexual abuse, either.

The full Streamlabs and Stream Hatchet report is here.

For the last two weeks, I’ve been flying around the world in a preview of…